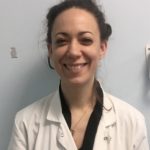 The project SoNeTAA (Social Neuroscience for Therapeutic Approaches in Autism) combines human-human and human-machine interactions with electroencephalography (EEG) recording to approach social cognition from a situated and reciprocal standpoint. The project especially focuses on Autism Spectrum Disorders and aims to bridge the gap between state of the art social neuroscience methods and clinical practices.

Human-Computer Interaction via the “Human Dynamic Clamp” (HDC), recreating a bidirectional interaction in real time between a human and a computer whose algorithm simulates human behavior (Dumas, 2014).

Digital therapeutics via the development of the first Mixed Reality serious game for the evaluation and rehabilitation of social deficits in ASD based on scientific literature.

Neuro-behavioral Synchronization: Interactional synchrony is the set of neuro-physiological and behavioral processes involved in a social interaction allowing a tuning between two participants. It is observed in particular during imitative behavior.

Precision medicine: Also known as personalized medicine, its aim is to provide the subject with a diagnostic and therapeutic evaluation as close as possible to his or her individual characteristics.

Biomarker: A biomarker is a measurable biological characteristic linked to a normal or pathological process. In the medical field, it can be used, for example, in medical screening (search for a disease in a population) and diagnosis (characterization of a disease in an individual).

Stratification: The stratified approach consists of tailoring the treatment or diagnosis to the patient according to his/her biological characteristics, including biomarkers. 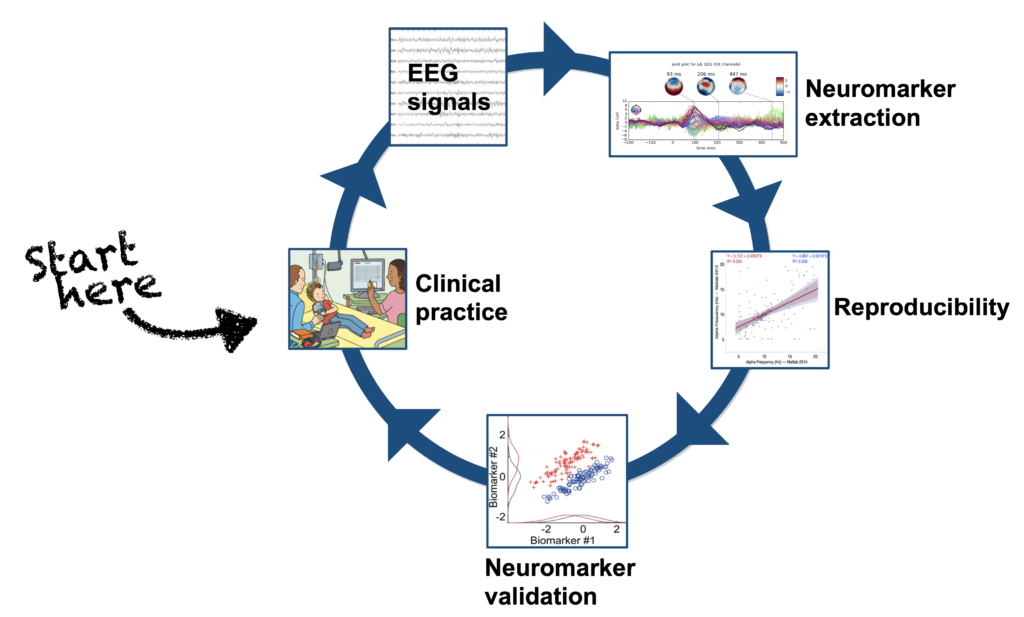 The data collected by SoNeTAA allows to constitute more homogeneous groups of patients (biologically and behaviorally). The proposed assessments in a large pediatric population, would make it possible to describe normal and pathological developmental stages in terms of psycho-motor and social skills.

Diagnostic and stratification biomarkers: Our project would improve the sensitivity and specificity of the diagnosis and early detection of social communication disorders. Thus, we propose to identify diagnostic biomarkers in ASD using the different platform assessments (EEG-HD, Hyperscanning, Source Reconstruction, Electrodermal Response, Oculometry), with the aim of characterizing different phenotypic clusters in ASD to improve the management of these patients. Delayed diagnosis further hinders patient screening (HAS, 2018).

Mechanistics: Understanding the neuro-anatomical structures involved through source reconstruction will aim to refine our understanding of cerebral and sub-cortical processes, with a particular interest in the connectivity between the cerebellum and the sensory and motor cortical networks.

Normative models: To improve our understanding of the typical cognitive development of children and adolescents through the study of neuro-physiological, neuro-anatomical and psycho-motor processes taking into account the age effect. SoNeTAA will thus make it possible to better describe typical developmental stages and to create normative models for the monitoring and standardized evaluation of sensory-motor and socio-cognitive skills in the context of social interaction.

In addition to translational research in a clinical context, the project also aims to develop serious games, innovative “gamified” therapeutics for ASD. Indeed, the significant and robust results of the HDC already constitute a basis for the development of a therapeutic device taking the form of a virtual game. A Mixed Reality video-game prototype has been developped and allows the extraction of user-specific sensor-motor parameters from a short game session. It consists of a virtual 3D psychometric evaluation when wearing a mixed reality helmet. Other software developments are of course planned in view of the very promising aspect of this first prototype.