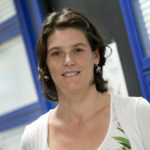 Photoreceptors (PRs) convert light inputs into electrical signals that are further processed into the retina. These cells are in contact with the retinal pigment epithelium or RPE, which provides them trophic support and maintains PR homeostasis. A number of defects altering the functions of this RPE layer lead to some forms of PR degeneration. The loss of PRs, due to their malfunctions or to a primary dysfunction or death of RPE cells, might impact the vision of affected patients and in some cases ultimately lead to blindness. Retinitis Pigmentosa (RP) is a heterogeneous group of inherited disorders with more than 60 genes involved and could affect either the RPE, or the PRs or both. Taken individually, each monogenic dystrophy is rare but the global prevalence for RP is comprised between 1/3500 and 1/4000. Mutations affecting RPE functions account for 5% of all RP. Though the clinical picture is variable according to the nature of the mutation, patients usually experiment night vision loss followed by the reduction of visual field from the periphery to the centre (named tunnel vision). At late stages, central vision might also be lost leading to blindness. There is no available curative treatment for RP in Europe. In US, FDA approved the first gene therapy to treat RPE65 mutated patients. However, this treatment is susceptible to treat only a minority of patients.

Age-related macular degeneration (AMD) is the other main condition in which PRs degenerate. AMD, which represents the leading cause of blindness in western countries, is progressing among the population with an estimation of 288 million affected patients in 20401. The aetiology of AMD is multifactorial with a combination of genetic and environmental causes. Accumulation of deposits close to RPE cells, inflammatory modulation and oxidative damages seem to be at the origin of RPE alterations. Damages mainly occur in PRs located in the macular area, affecting thus the central vision. There is no curative treatment for 90% of AMD patients (dry form of AMD).

For all these diseases, a specific cell therapy strategy could be applied to fulfil this unmet medical need, depending on its stage in order to restore the degenerated tissue. For early cases of AMD, where RPE cells are lost and Bruch membrane damaged but PRs are still preserved and for RP associated to RPE defects also at early stages, a RPE cell therapy could be applied . We have developed such therapy recently with a phase I/II clinical trial for RP patients that will start by mid-2019.

When PRs are also lost or for RP associated to PR defects, a combination of PRs and RPE cell therapy corresponds to the more appropriated treatment. However, the proof of concept for this last combination was never demonstrated.

Corrigendum to “Cathepsin B pH-Dependent Activity Is Involved in Lysosomal Dysregulation in Atrophic Age-Related Macular Degeneration”.