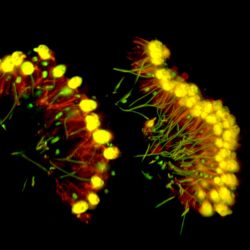 After going through cell division, gastrulation and organogenesis, I was born in Dijon in a multicellular form. I quickly acquired directed motility and I moved to Paris to study biology at the Ecole Normale Supérieure (2007-2011), and then to Heidelberg (Germany) to do my PhD in the lab of Detlev Arendt at EMBL (2011-2016), where I studied the development and evolution of muscle cells. I then moved to California to do my postdoc in the lab of Nicole King in UC Berkeley, where I studied morphogenesis and cell contractility in choanoflagellates, the closest living relatives of animals (2016-2021). In 2021, I was recruited as a G5 group leader in the department of Cell Biology and Infection at the Institut Pasteur where I set up my own lab “Evolutionary cell biology and evolution of morphogenesis”.