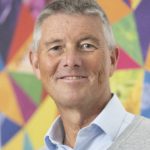 Stewart Cole is an internationally renowned scientist and Professor of Microbial Pathogenesis. Since January 2nd, 2018, he is the President of the Institut Pasteur.

From 2007 to 2017, he was full Professor and Director of the Global Health Institute at the Ecole Polytechnique Fédérale de Lausanne (EPFL), the Swiss Federal Institute of Technology of Lausanne – a world-leading education and research center, where he is now Professor Emeritus.

Prior to joining EPFL, Professor Cole worked for 24 years as a researcher and group leader at the Institut Pasteur, and also held various research management positions. He was Director of Strategic Technologies and then Executive Scientific Director. He was also acting President of the Institut Pasteur in Paris in 2005.

He has been the recipient of many national and international prizes and distinctions. In 2009, he was awarded the World Health Organization’s prestigious Stop-TB Partnership Kochon Prize. Other prizes include : Prix Jean-Pierre Lecocq, Académie des Sciences, France ; Marjory Stephenson Prize from the Society for General Microbiology, UK; Emil von Behring Prize from the University of Marburg, Gardner Middlebrook Lifetime Achievement Award.  Professor Cole is an EMBO member, Fellow of the Royal Society, UK and associate member of the National Academy of Pharmacy, France.

He has been involved in the work of several foundations (Chair of the board of the Innovative Medicines for Tuberculosis Foundation and President of the Commission médicale of the Fondation Raoul Follereau). Professor Cole has served on numerous scientific committees at the World Health Organization, the Wellcome Trust, the Howard Hughes Medical Institute and elsewhere.

Stewart Cole has published more than 350 scientific papers on infectious diseases, most notably tuberculosis and leprosy.

Stewart Cole’s current research is in the field of drug discovery and drug development for tuberculosis (TB).  He is the scientific leader of ERA4TB (European Regimen Accelerator for Tuberculosis) a public-private initiative devoted to accelerate the development of new treatment regimens for tuberculosis (https://era4tb.org/). He has previously investigated a range of topics including: bacterial electron transport systems; the genomics and diagnostics of retroviruses (HIV) and oncogenic papillomaviruses (HPV); antibiotic resistance mechanisms; and the molecular microbiology of toxigenic clostridia. Cole is best-known for his pioneering work on the genomics, evolution and virulence of pathogenic mycobacteria, especially those causing the human diseases TB and leprosy.