• Structures and signals in the neurogenic niche 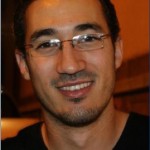 After completing my undergraduate studies in Algiers, I joined the “Haematopoiesis and Immunity lab” led by Dr. Marc Haenlin and Dr. Lucas Waltzer at the “Centre de Biologie du Développement” in Toulouse. I investigated the impact of nutrition and the role of the Insulin/Target-Of-Rapamycin signalling pathway, as well as the role of a specialised microenvironment, called the haematopoietic niche, on blood system homeostasis. After my PhD, I once again moved north to join the “Apoptosis and Proliferation Control Laboratory” led by Dr Nic Tapon at the Francis Crick Institute in London. There, I investigated upstream signals regulating the Hippo tumour suppressor pathway. Then, I came back to France and I joined the “Brain plasticity in response to the environment lab” led by Dr. Pauline Spéder at the Institut Pasteur.