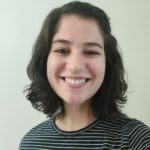 Ana Maria Santi is a postdoctoral researcher at the Institute Pasteur’s Molecular Parasitology and Signalling unit. She holds a bachelor’s degree in biomedicine (UFMG, Brazil), an M.Sc. degree (FIOCRUZ MINAS, Brazil), and a Ph.D. in Health Sciences, with a focus on Cellular and Molecular Biology (FIOCRUZ MINAS, Brazil). She has also completed a one-year internship at Washington University in St. Louis (United States). She has a background in biotechnology, molecular biology, and parasitology. She has worked on the production of recombinant proteins and polyclonal antibodies, drug testing, and the generation of genetically modified parasites using several different molecular tools, such as CRISPR/Cas9 for gene knockout and gene tagging, overexpression, expression of heterologous proteins, and inducible systems. Ana Maria’s current research focuses on two main areas: the development of knockout mutants to study the parasite’s adaptation to different environments, as well as the study of genomic and transcriptomic variations between different Leishmania infantum field isolates.