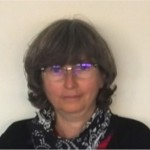 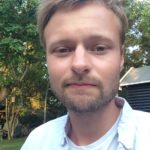 USP18 is an isopeptidase that cleaves the ubiquitin-like ISG15 from conjugates and is also an essential negative feedback regulator of type I interferon signaling. We and others reported that USP18 protein is stabilized by ISG15 and targeted for degradation by SKP2 (S-phase kinase associated protein 2), the substrate-recognition subunit of the SCF ubiquitin E3 ligase complex, which operates in cell cycle progression. Here, we have analyzed how, under non stimulated conditions, USP18, ISG15 and SKP2 communicate with each other, by enforcing or silencing their expression. We found that USP18 and SKP2 interact and that free ISG15 abrogates the complex, liberating USP18 from degradation and concomitantly driving SKP2 to degradation and/or ISGylation. These data reveal a dynamic interplay where the substrate USP18 stabilizes SKP2, both exogenous and endogenous. Consistent with this we show that silencing of baseline USP18 slows down progression of HeLa S3 cells towards S phase. Our findings point to USP18 and ISG15 as unexpected new SKP2 regulators, which aid in cell cycle progression at homeostasis.