The effect of slice orientation on auditory FMRI at the level of the brainstem. 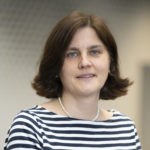 Although auditory information is processed in several subcortical nuclei, most fMRI studies focus solely on the auditory cortex and do not take brainstem responses into account. One common difficulty in obtaining clear functional brainstem recordings is due to heartbeat related motion, manifested in the rostro-caudal and in the ventro-dorsal directions in the contraction phase of the heart. The aim of this study was to investigate the effect of slice orientation on auditory functional magnetic resonance imagining (fMRI) measurements with respect to the pattern of brainstem oscillation. Fourteen healthy volunteers listened monaurally to modulated pink noise. Blood oxygenation level dependent (BOLD) contrast was performed with an echo-planar image (EPI) sequence using a 3T MRI system. Three different slice orientations were compared: approximately parallel, at 45 degrees , and orthogonal to the brainstem. The standard deviation of the residuals, the effect size, the median t-values, and the number of activated voxels were calculated to quantify variability in activation between orientations. The data for the inferior colliculi indicated that a slice orientation with a 45 degrees angle to the brainstem yielded the lowest sensitivity to motion (reflected in the standard deviation of the residuals). By contrast, the results did not suggest differences between the three imaging planes on the scanning of the auditory cortex. Findings indicate that the 45 degrees slice orientation is the optimum orientation for accurate measurement at the upper brainstem level.