The DNA polymerase of bacteriophage YerA41 replicates its T-modified DNA in a primer-independent manner. 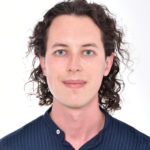 Yersinia phage YerA41 is morphologically similar to jumbo bacteriophages. The isolated genomic material of YerA41 could not be digested by restriction enzymes, and used as a template by conventional DNA polymerases. Nucleoside analysis of the YerA41 genomic material, carried out to find out whether this was due to modified nucleotides, revealed the presence of a ca 1 kDa substitution of thymidine with apparent oligosaccharide character. We identified and purified the phage DNA polymerase (DNAP) that could replicate the YerA41 genomic DNA even without added primers. Cryo-electron microscopy (EM) was used to characterize structural details of the phage particle. The storage capacity of the 131 nm diameter head was calculated to accommodate a significantly longer genome than that of the 145 577 bp genomic DNA of YerA41 determined here. Indeed, cryo-EM revealed, in contrast to the 25 Å in other phages, spacings of 33-36 Å between shells of the genomic material inside YerA41 heads suggesting that the heavily substituted thymidine increases significantly the spacing of the DNA packaged inside the capsid. In conclusion, YerA41 appears to be an unconventional phage that packages thymidine-modified genomic DNA into its capsids along with its own DNAP that has the ability to replicate the genome.