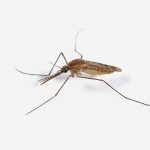 West Nile virus (WNV) is an increasing public health concern in Europe with numerous human cases. A total of 23,029 female mosquitoes were tested for a variety of mosquito-borne flaviviruses and orthobunyaviruses supposedly endemic in Southern Transdanubia, Hungary, in the frames of a large-scale surveillance between 2011 and 2013. WNV nucleic acid was detected in a single pool containing Uranotaenia unguiculata mosquitoes. Sequence- and phylogenetic analyses for two different regions (NS5 and E) of the viral genome showed that the novel Hungarian WNV strain was different from other previously described WNV lineages. These findings may indicate the presence of a putative, novel lineage of WNV in Europe. Our results also indicate that U. unguiculata mosquito may become relevant species as a potential vector for West Nile virus in Europe.