e.g. searching for members in projects tagged cancer
Rechercher
Compteur
IN
OUT
Contenu 1
Contenu 2
Recherche
Revenir
Haut de page
Partagez
Snail is required for Delta endocytosis and Notch-dependent activation of single-minded expression
Crystal structure of the catalytic domain of the PknB serine/threonine kinase from Mycobacterium tuberculosis
© Structural Dynamics Of Macromolecules
The structure of a bacterial analog of the nicotinic receptor (one color per subunit) inserted into the cell membrane (grey and orange). A representation of the volume accessible to ions is shown in yellow.
Publication : The Journal of biological chemistry 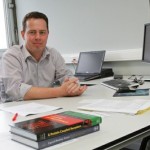 The chemical synthesis of new compounds designed as inhibitors of Mycobacterium tuberculosis TMP kinase (TMPK) is reported. The synthesis concerns TMP analogues modified at the 5-position of the thymine ring as well as a novel compound with a six-membered sugar ring. The binding properties of the analogues are compared with the known inhibitor azido-TMP, which is postulated here to work by excluding the TMP-bound Mg(2+) ion. The crystallographic structure of the complex of one of the compounds, 5-CH(2)OH-dUMP, with TMPK has been determined at 2.0 A. It reveals a major conformation for the hydroxyl group in contact with a water molecule and a minor conformation pointing toward Ser(99). Looking for a role for Ser(99), we have identified an unusual catalytic triad, or a proton wire, made of strictly conserved residues (including Glu(6), Ser(99), Arg(95), and Asp(9)) that probably serves to protonate the transferred PO(3) group. The crystallographic structure of the commercially available bisubstrate analogue P(1)-(adenosine-5′)-P(5)-(thymidine-5′)-pentaphosphate bound to TMPK is also reported at 2.45 A and reveals an alternative binding pocket for the adenine moiety of the molecule compared with what is observed either in the Escherichia coli or in the yeast enzyme structures. This alternative binding pocket opens a way for the design of a new family of specific inhibitors.

TMPK from Mycobacterium tuberculosis belongs to the NMPK family, which was chosen as potential targets for the development of new antimicrobials (see “Nucleoside monophosphate kinases” project). Based on the 3D-structure of TMPK from M. […]