HIV-1 infection is associated with B cell dysregulation and dysfunction. In HIV-1-infected patients, we previously reported preservation of intestinal lymphoid structures and dendritic cell maturation pathways after early combination antiretroviral therapy (e-ART), started during the acute phase of the infection, compared with late combination antiretroviral therapy started during the chronic phase. In this study, we investigated whether the timing of combination antiretroviral therapy initiation was associated with the development of the HIV-1-specific humoral response in the gut. The results showed that e-ART was associated with higher frequencies of functional resting memory B cells in the gut. These frequencies correlated strongly with those of follicular Th cells in the gut. Importantly, frequencies of HIV-1 Env gp140-reactive B cells were higher in patients given e-ART, in whom gp140-reactive IgG production by mucosal B cells increased after stimulation. Moreover, IL-21 release by PBMCs stimulated with HIV-1 peptide pools was greater with e-ART than with late combination antiretroviral therapy. Thus, early treatment initiation helps to maintain HIV-1-reactive memory B cells in the gut as well as follicular Th cells, whose role is crucial in the development of potent affinity-matured and broadly neutralizing Abs. 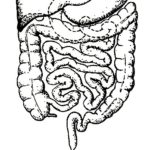