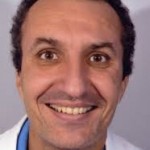 Streptococcus gallolyticus subspecies gallolyticus (SGG) is an opportunistic pathogen causing invasive infections in the elderly often associated with colon neoplasia. The prevalence of SGG in the stools of patients with normal colonoscopy (control) was compared with patients with colorectal adenomas (CRA) or with carcinomas (CRC) from stages I to IV. The presence of the pks island encoding colibactin as well as other CRC-associated bacteria such as toxicogenic Bacteroides fragilis, Fusobacterium nucleatum, and Parvimonas micra was also investigated.Fecal samples collected in France between 2011 and 2016 from patients with normal colonoscopy (n = 25), adenoma (n = 23), or colorectal cancer at different stages (n = 81) were tested by PCR for the presence of SGG, B. fragilis, F. nucleatum, P. micra, and the pks island. Relative quantification of SGG, F. nucleatum, and P. micra in stools was performed by qPCR.SGG prevalence was significantly increased in the CRC group. Our results also revealed i) a strong and significant increase of toxinogenic B. fragilis in patients with early-stage adenoma and of pks island at late-stage CRC and ii) increased levels of F. nucleatum and P. micra in the stools of CRC patients. Furthermore, the simultaneous detection of these five bacterial markers was only found in CRC patients.Our results indicate that the prevalence or relative levels of CRC-associated bacteria vary during CRC development. Among them, B. fragilis (bft+) was singled out as the sole pathobiont detected at the early adenoma stage.