e.g. searching for members in projects tagged cancer
Rechercher
Compteur
IN
OUT
Contenu 1
Contenu 2
Recherche
Revenir
Haut de page
Partagez
Incorporation of a minimal nucleotide into DNA
Leave no one behind: response to new evidence and guidelines for the management of cryptococcal meningitis in low-income and middle-income countries
© Recherche
Publication : The Journal of neuroscience : the official journal of the Society for Neuroscience

In developed countries, cytomegalovirus (CMV)-infected newborns are at high risk of developing sensorineural handicaps such as hearing loss, requiring extensive follow-up. However, early prognostic tools for auditory damage in children are not yet available. In the fetus, CMV infection leads to early olfactory bulb (OB) damage, suggesting that olfaction might represent a valuable prognosis for neurological outcome of this viral infection. Here, we demonstrate that CMV inoculation causes fetal infection and growth retardation in mice of both sexes. It disrupts OB normal development, leading to disproportionate OB cell layers and rapid major olfactory deficits. Olfaction is impaired as early as day 6 after birth in both sexes, long before the emergence of auditory deficits. Olfactometry in males reveals a long-lasting alteration in olfactory perception and discrimination, particularly in binary mixtures of monomolecular odorants. Although sensory inputs to the OB remain unchanged, hallmarks of autophagy are increased in the OB of 3-postnatal week-old mice, leading to local neuroinflammation and loss of neurons expressing tyrosine hydroxylase and calbindin. At the cellular level, we found CMV-infected cells and an increased number of apoptotic cells scattered throughout the OB layers, whereas cell proliferation in the neurogenic subventricular zone was decreased. These cellular observations were long-lasting, persisting up to 16 weeks after birth in both males and females and thus providing a mechanism supporting olfactory loss. Despite obvious differences in neurogenesis between human and mouse, these findings offer new strategies aimed at early detection of neurological dysfunctions caused by congenital infections. In developed countries, congenital cytomegalovirus (CMV)-infected newborns are at high risk of developing sensory handicaps such as hearing loss, thus requiring prolonged follow-up. In this study, we describe for the first time the functional impact of congenital CMV infection on the olfactory system and its associated sense of smell. We demonstrate that a mouse model of congenital CMV infection shows defects in olfactory bulb (OB) normal development and pronounced olfactory deficits affecting acuity and discrimination of odorants. These major olfactory deficits occur long before the emergence of auditory deficits through the upregulation of OB autophagy inducing local neuroinflammation and altered neuron content. Our findings provide new opportunities for designing olfactory means to monitor the possible neurological outcome during congenital CMV infection. 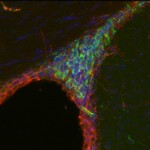 Human cytomegalovirus (CMV) is the first cause of congenital malformation resulting from viral infection, and the leading cause of mental retardation and hearing loss. We are assessing the impact of congenital CMV infection on […]