Characterization of the Spatial and Temporal Distribution of Nipah Virus Spillover Events in Bangladesh, 2007-2013.

Nipah virus is a zoonotic virus harbored by bats and lethal to humans. Bat-to-human spillovers occur every winter in Bangladesh. However, there is significant heterogeneity in the number of spillovers detected by district and year that remains unexplained. We analyzed data from all 57 spillovers during 2007-2013 and found that temperature differences explained 36% of the year-to-year variation in the total number of spillovers each winter and that distance to surveillance hospitals explained 45% of spatial heterogeneity. Interventions to prevent human infections may be most important during colder winters. Further work is needed to understand how dynamics of bat infections explains spillover risk. 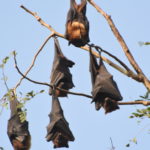 Developing a One Health perspective: the case of Nipah virus

Nipah virus (NiV) is a bat-borne paramyxovirus found throughout South and South East Asia. With a case fatality ratio of >70% and no available treatment or vaccines, NiV has been identified by the […]