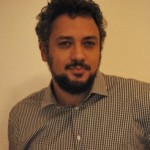 It has been known for nearly 100 years that pressure unfolds proteins, yet the physical basis of this effect is not understood. Unfolding by pressure implies that the molar volume of the unfolded state of a protein is smaller than that of the folded state. This decrease in volume has been proposed to arise from differences between the density of bulk water and water associated with the protein, from pressure-dependent changes in the structure of bulk water, from the loss of internal cavities in the folded states of proteins, or from some combination of these three factors. Here, using 10 cavity-containing variants of staphylococcal nuclease, we demonstrate that pressure unfolds proteins primarily as a result of cavities that are present in the folded state and absent in the unfolded one. High-pressure NMR spectroscopy and simulations constrained by the NMR data were used to describe structural and energetic details of the folding landscape of staphylococcal nuclease that are usually inaccessible with existing experimental approaches using harsher denaturants. Besides solving a 100-year-old conundrum concerning the detailed structural origins of pressure unfolding of proteins, these studies illustrate the promise of pressure perturbation as a unique tool for examining the roles of packing, conformational fluctuations, and water penetration as determinants of solution properties of proteins, and for detecting folding intermediates and other structural details of protein-folding landscapes that are invisible to standard experimental approaches.