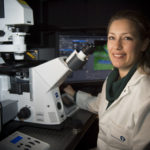 Neural stem cells remain in two areas of the adult mammalian brain, the subventricular zone (SVZ) and the dentate gyrus of the hippocampus. Ongoing neurogenesis via the SVZ-rostral migratory stream pathway maintains neuronal replacement in the olfactory bulb (OB) throughout life. The mechanisms determining how neurogenesis is restricted to only a few regions in the adult, in contrast to its more widespread location during embryogenesis, largely depend on controlling the balance between precursor cell proliferation and differentiation. BM88/Cend1 is a neuronal lineage-specific regulator implicated in cell cycle exit and differentiation of precursor cells in the embryonic neural tube. Here we investigated its role in postnatal neurogenesis. Study of in vivo BM88/Cend1 distribution revealed that it is expressed in low levels in neuronal precursors of the adult SVZ and in high levels in postmitotic OB interneurons. To assess the functional significance of BM88/Cend1 in neuronal lineage progression postnatally, we challenged its expression levels by gain- and loss-of-function approaches using lentiviral gene transfer in SVZ-derived neurospheres. We found that BM88/Cend1 overexpression decreases proliferation and favors neuronal differentiation, whereas its downregulation using new-generation RNA interference vectors yields an opposite phenotype. Our results demonstrate that BM88/Cend1 participates in cell cycle control and neuronal differentiation mechanisms during neonatal SVZ neurogenesis and becomes crucial for the transition from neuroblasts to mature neurons when reaching high levels.