African trypanosomes are protozoa (unicellular organisms) belonging to the Kinetoplastida order. They are elongated cells (20-25 µm long, 3-5 µm wide), although certain variations are observed during the life cycle. They are eukaryotic organisms and possess a nucleus surrounded by a nuclear membrane with classic nucleopores. The genome of Trypanosoma brucei contains 35 Mb, with 11 “large” chromosomes and about 100 “mini-chromosomes”.  Its full sequence was published in July 2005 and data can be accessed at GeneDb.

The cell is covered by a dense surface coat that is different according to stages of the life cycle. When trypanosomes infect the bloodstream, the surface coat made of Variant Surface Glycoprotein (VSG) is regularly replaced, ensuring immune evasion.  In the insect midgut stages, a different coat, made of procyclins is present. Both families of proteins are anchored to the membrane by a modified phospholipid, the GPI anchor (first discovered in trypanosomes). Once in the salivary glands, trypanosomes express yet a different surface molecule called BARP.

Trypanosomes possess a single flagellum that is always motile and that exhibits several features, including the fact of being attached to the cell body (see Trypanosome Flagellum section).  Underneath the plasma membrane is found a dense network of microtubules that defines cell shape. It is so stable that it survives detergent extraction. The presence of this corset restricts endocytosis that can only occur at the level of the flagellar pocket, a surface invagination from which the flagellum emerges from the cell body.  Its collar is maintained by a cytoskeletal structure essential for the maintenance and/or formation of the flagellar pocket.

The cellular organelles of trypanosomes exhibit amazing features. They possess a single mitochondrion that is very large and spreads throughout the cell body. Its mitochondrial DNA is made of a mass of large and small circles that are tightly packed and is called the kinetoplast. It is the only mitochondrial DNA that can be readily detected by light microscopy without staining procedure. It is physically linked by fibres to the basal body of the flagellum. It is the site of RNA editing-the phenomenon of addition and deletion of U in mitochondrial transcripts- that was actually first discovered in trypanosomes! In staed of classic peroxisomes, trypanosomes possess “glycosomes” that contain the first 7 enzymes of glycolysis and different enzymes according to the life cycle stage. When present in the bloodstream, trypanosomes exclusively rely on glycolysis as energy source. 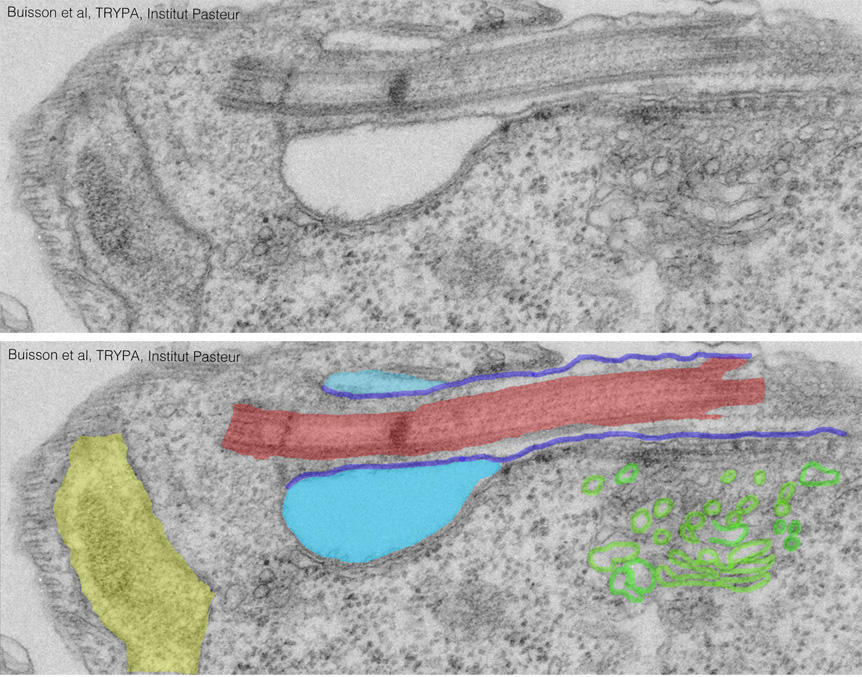 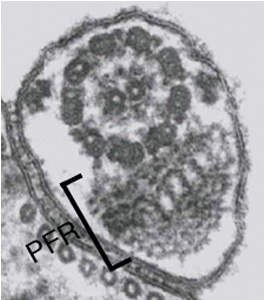 Transmission electron micrograph showing a cross-section of the flagellum. The outer doublet microtubules, the central pair and the PFR are visible. Kohl et al. 2005

Trypanosomes possess a single flagellum that emerges from the flagellar pocket and that is attached for most of its length at the surface of the cell body with the exception of its distal tip. The region of the cell body found underneath the flagellum is specialised and defined as the flagellum attachment zone or FAZ. The length and positioning of the flagellum varies extensively during the life cycle and was used as a central criterion to define the different development stages, especially when parasites infect the tsetse fl

Sections through the flagellum reveal a different organisation according to the position. When the flagellum is found at the surface of the cell, it contains two cytoskeletal elements: the axoneme, made of nine doublets of microtubles surrounding a central pair (as in most ciliated or flagellated eukaryotes), and the paraflagellar rod (PFR), wrapped by the flagellar membrane that is in tight contact with the plasma membrane. The PFR is unique to the Euglenoids and not encountered in other groups of eukaryotes, although morphologically related structures have been described in dinoflagellates. The PFR is not present in the portion of the flagellum found in the flagellar pocket. At the distal end, the flagellum is free and not anchored to the cell body.

Longitudinal section through the flagellum attachment zone in a procyclic trypanosome. The repetitive nature of FAZ electron-dense structures found immediately underneath the plasma membrane is easily recognised. From Buisson et al. 2010