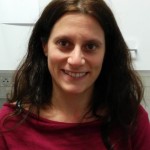 Mitogaligin, a protein encoded by galig, an internal cytotoxic gene of the galectin-3 locus, is mostly a mitochondrial protein. Mitochondrial targeting is due to an already identified mitochondrial localization signal. Interaction of mitogaligin with mitochondria leads to cytochrome c cytosolic leakage and ultimately to cell death. We have previously pointed out that mitogaligin can also be directed to the nucleus when the mitochondrial addressing signal is inactivated, indicating a possible dual intracellular localization of the protein. When expressed in the nucleus, mitogaligin exhibits also apoptotic properties leading to cell death. In this report, we show that nuclear addressing of mitogaligin depends on a sequence differing from classical signals containing basic, lysine or proline-tyrosine rich residues. The signal consists of a long sequence of amino acids residues based on a series of a short repetitive degenerated sequence.