Review. Peering into an ATPase ion pump with single-channel recordings 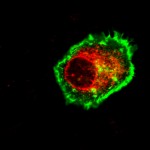 In principle, an ion channel needs no more than a single gate, but a pump requires at least two gates that open and close alternately to allow ion access from only one side of the membrane at a time. In the Na+,K+-ATPase pump, this alternating gating effects outward transport of three Na+ ions and inward transport of two K+ ions, for each ATP hydrolysed, up to a hundred times per second, generating a measurable current if assayed in millions of pumps. Under these assay conditions, voltage jumps elicit brief charge movements, consistent with displacement of ions along the ion pathway while one gate is open but the other closed. Binding of the marine toxin, palytoxin, to the Na+,K+-ATPase uncouples the two gates, so that although each gate still responds to its physiological ligand they are no longer constrained to open and close alternately, and the Na+,K+-ATPase is transformed into a gated cation channel. Millions of Na+ or K+ ions per second flow through such an open pump-channel, permitting assay of single molecules and allowing unprecedented access to the ion transport pathway through the Na+,K+-ATPase. Use of variously charged small hydrophilic thiol-specific reagents to probe cysteine targets introduced throughout the pump’s transmembrane segments allows mapping and characterization of the route traversed by transported ions.