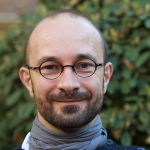 Linker histone (H1) and heterochromatin protein 1 (HP1) are essential components of heterochromatin which contribute to the transcriptional repression of genes. It has been shown that the methylation mark of vertebrate histone H1 is specifically recognized by the chromodomain of HP1. However, the exact biological role of linker histone binding to HP1 has not been determined. Here, we investigate the function of the Caenorhabditis elegans H1 variant HIS-24 and the HP1-like proteins HPL-1 and HPL-2 in the cooperative transcriptional regulation of immune-relevant genes. We provide the first evidence that HPL-1 interacts with HIS-24 monomethylated at lysine 14 (HIS-24K14me1) and associates in vivo with promoters of genes involved in antimicrobial response. We also report an increase in overall cellular levels and alterations in the distribution of HIS-24K14me1 after infection with pathogenic bacteria. HIS-24K14me1 localization changes from being mostly nuclear to both nuclear and cytoplasmic in the intestinal cells of infected animals. Our results highlight an antimicrobial role of HIS-24K14me1 and suggest a functional link between epigenetic regulation by an HP1/H1 complex and the innate immune system in C. elegans.