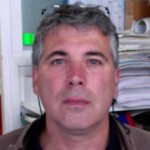 Consumption of cereals contaminated by mycotoxins poses health risks. For instance, Fumonisins B, mainly produced by Fusarium verticillioides and Fusariumproliferatum, and the type B trichothecene deoxynivalenol, typically produced by Fusarium graminearum, are highly prevalent on cereal grains that are staples of many cultural diets and known to represent a toxic risk hazard. In Peru, corn and other cereals are frequently consumed on a daily basis under various forms, the majority of food grains being sold through traditional markets for direct consumption. Here, we surveyed mycotoxin contents of market-bought grain samples in order to assess the threat these mycotoxins might represent to Peruvian population, with a focus on corn. We found that nearly one sample of Peruvian corn out of six was contaminated with very high levels of Fumonisins, levels mostly ascribed to the presence of F. verticillioides. Extensive profiling of Peruvian corn kernels for fungal contaminants could provide elements to refine the potential risk associated with Fusarium toxins and help define adapted food safety standards.