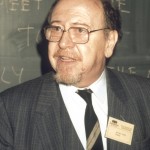 My encounter with Jacques Monod has shaped my scientific career. After a short incursion in the biochemistry of strict anaerobes, and after elucidating the biosynthetic pathway leading from aspartate to threonine in Escherichia coli, I joined his laboratory. With him and Howard Rickenberg, I discovered the stereospecific permeability of galactosides and amino acids (permeases). After this intermezzo, I returned to the analysis of biosynthetic pathways and of their regulation by allosteric feedback inhibition and repression in E. coli. Among others, my studies led to the discovery of the tryptophan and methionine repressors, to the incorporation of amino acid analogues in proteins, including selenomethionine (which much later led to progress in protein crystallography), to the definition of isofunctional and multifunctional enzymes, and to the elucidation of the primary structure of most of the enzymes leading to threonine and methionine.