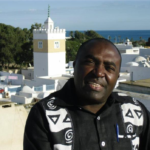 Members of the species Enterovirus D (EV-D) remain poorly studied. The two first EV-D types (EV-D68 and EV-D70) have regularly caused outbreaks in humans since their discovery five decades ago but have been neglected until the recent occurrence of severe respiratory diseases due to EV-D68. The three other known EV-D types (EV-D94, EV-D111 and EV-D120) were discovered in the 2000s-2010s in Africa and have never been observed elsewhere. One strain of EV-D111 and all known EV-D120s were detected in stool samples of wild non-human primates, suggesting that these viruses could be zoonotic viruses. To date, EV-D111s are only known through partial genetic sequences of the few strains that have been identified so far. In an attempt to bring new pieces to the puzzle, we genetically characterized four EV-D111 strains (among the seven that have been reported until now). We observed that the EV-D111 strains from human samples and the unique simian EV-D111 strain were not phylogenetically distinct, thus suggesting a recent zoonotic transmission. We also discovered evidences of probable intertypic genetic recombination events between EV-D111s and EV-D94s. As recombination can only happen in co-infected cells, this suggests that EV-D94s and EV-D111s share common replication sites in the infected hosts. These sites could be located in the gut since the phenotypic analysis we performed showed that, contrary to EV-D68s and like EV-D94s, EV-D111s are resistant to acid pHs. We also found that EV-D111s induce strong cytopathic effects on L20B cells, a cell line routinely used to specifically detect polioviruses. An active circulation of EV-D111s among humans could then induce a high number of false-positive detection of polioviruses, which could be particularly problematic in Central Africa, where EV-D111 circulates and which is a key region for poliovirus eradication.