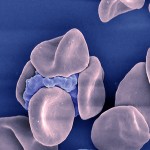 METHODS: In the present study, the frequency of mixed infections in different part of French Guiana was determined using real time PCR, a sensitive and specific technique.

RESULTS: From 400 cases of malaria initially diagnosed by microscopy, real time PCR showed that 10.75 % of the cases were mixed infections. Their prevalence varied considerably between geographical areas. The presence, in equivalent proportions, of the two plasmodial species in eastern French Guiana was associated with a much higher prevalence of mixed plasmodial infections than in western French Guiana, where the majority of the population was Duffy negative and thus resistant to vivax malaria.

CONCLUSION: Clinicians must be more vigilant regarding mixed infections in co-endemic P. falciparum/P. vivax areas, in order to deliver optimal care for patients suffering from malaria. This may involve the use of rapid diagnostic tests capable of detecting mixed infections or low density single infections. This is important as French Guiana moves towards malaria elimination.