e.g. searching for members in projects tagged cancer
Search for
Count
IN
OUT
Content 1
Content 2
Search
Go back
Scroll to top
Share
Combination of single nucleotide polymorphism and variable-number tandem repeats for genotyping a homogenous population of Mycobacterium tuberculosis Beijing strains in China
Use of ChIP-Seq data for the design of a multiple promoter-alignment method
© Research
Publication : Proceedings of the National Academy of Sciences of the United States of America

Tuberculosis (TB) is a major public health problem. One-third of the world’s population is estimated to be infected with Mycobacterium tuberculosis (MTB), the etiological agent causing TB, and active disease kills nearly 2 million individuals worldwide every year. Several lines of evidence indicate that interindividual variation in susceptibility to TB has a heritable component, yet we still know little about the underlying genetic architecture. To address this, we performed a genome-wide mapping study of loci that are associated with functional variation in immune response to MTB. Specifically, we characterized transcript and protein expression levels and mapped expression quantitative trait loci (eQTL) in primary dendritic cells (DCs) from 65 individuals, before and after infection with MTB. We found 198 response eQTL, namely loci that were associated with variation in gene expression levels in either untreated or MTB-infected DCs, but not both. These response eQTL are associated with natural regulatory variation that likely affects (directly or indirectly) host interaction with MTB. Indeed, when we integrated our data with results from a genome-wide association study (GWAS) for pulmonary TB, we found that the response eQTL were more likely to be genetically associated with the disease. We thus identified a number of candidate loci, including the MAPK phosphatase DUSP14 in particular, that are promising susceptibility genes to pulmonary TB. 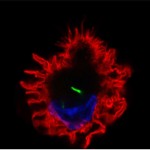 A striking feature of TB is that only 10% of infected individuals develop the disease. While a significant proportion of inter-individual variation in susceptibility to TB can be attributed to environmental factors, a substantial […]