e.g. searching for members in projects tagged cancer
Search for
Count
IN
OUT
Content 1
Content 2
Search
Go back
Scroll to top
Share
Modelling the impact of antimicrobial use and external introductions on commensal E. coli colistin resistance in small-scale chicken farms of the Mekong delta of Vietnam.
Structure-based design, synthesis and biological evaluation of a NAD+ analogue targeting Pseudomonas aeruginosa NAD kinase.
© Research
Publication : PloS one

Comparative study between radiofrequency-induced and muscimol-induced inhibition of cultured networks of cortical neuron. 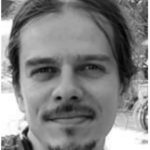 Previous studies have shown that spontaneously active cultured networks of cortical neuron grown planar microelectrode arrays are sensitive to radiofrequency (RF) fields and exhibit an inhibitory response more pronounced as the exposure time and power increase. To better understand the mechanism behind the observed effects, we aimed at identifying similarities and differences between the inhibitory effect of RF fields (continuous wave, 1800 MHz) to the γ-aminobutyric acid type A (GABAA) receptor agonist muscimol (MU). Inhibition of the network bursting activity in response to RF exposure became apparent at an SAR level of 28.6 W/kg and co-occurred with an elevation of the culture medium temperature of ~1°C. Exposure to RF fields preferentially inhibits bursting over spiking activity and exerts fewer constraints on neural network bursting synchrony, differentiating it from a pharmacological inhibition with MU. Network rebound excitation, a phenomenon relying on the intrinsic properties of cortical neurons, was observed following the removal of tonic hyperpolarization after washout of MU but not in response to cessation of RF exposure. This implies that hyperpolarization is not the main driving force mediating the inhibitory effects of RF fields. At the level of single neurons, network inhibition induced by MU and RF fields occurred with reduced action potential (AP) half-width. As changes in AP waveform strongly influence efficacy of synaptic transmission, the narrowing effect on AP seen under RF exposure might contribute to reducing network bursting activity. By pointing only to a partial overlap between the inhibitory hallmarks of these two forms of inhibition, our data suggest that the inhibitory mechanisms of the action of RF fields differ from the ones mediated by the activation of GABAA receptors.