e.g. searching for members in projects tagged cancer
Search for
Count
IN
OUT
Content 1
Content 2
Search
Go back
Scroll to top
Share
Cell fate determination in the hematopoietic system: from the hematopoietic stem cell to the lineage committed progenitors
Geometry of the DNA Substrates in Cre-loxP Site-Specific Recombination.
© Research
Publication : Blood 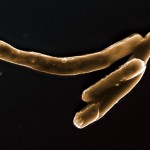 Expression of CD13/N-aminopeptidase may reflect cell activation and growth. We examined its role regarding cell growth in cultures of cord blood CD34(+) cells with stem cell factor/Flt-3 ligand/granulocyte-macrophage colony-stimulating factor/tumor necrosis factor-alpha. Indeed, 82% +/- 6% of cells from culture day 5 were CD13(hi), 25% +/- 8% of which were still Lin-. About 50% of CD13(hi)Lin- cells, which comprise progenitors of dendritic cells (DC), monocytes/macrophages and granulocytes, and 30% of CD13(lo)Lin- cells were CD34(+). Sorted CD34(+)CD13(hi)Lin- cells, cultured further for 7 days with the same cytokines, expanded 31-fold and CD34(-)CD13(hi)Lin- cells 7-fold, but CD34(+)CD13(lo)Lin- and CD34(-)CD13(lo)Lin- cells did not grow. Thus, cell growth correlated with CD13 expression, all the more so that cells were CD34(+). Actinonin, the most potent N-aminopeptidase inhibitor, was used to engage CD13 on sorted CD13(hi)Lin- cells and on culture day-7 bulk cells. In both cases, this resulted in reversible cell growth arrest, with 30% to 60% fewer cells in the G2/S-M phase than in controls. Interestingly, similar effects were noted with CD13 monoclonal antibody TUK1, which does not inhibit N-aminopeptidase activity, but not with N-aminopeptidase-blocking antibodies WM15 and F23. All cycling cells appeared susceptible to actinonin, which induced cell apoptosis at the same time as Bcl-2 was downregulated and caspase-3 activity increased, but finally percentages and yields of DC and macrophage precursors were affected more than those of granulocytic cells. Thus, through engagement of N-aminopeptidase enzymatic site but possibly also of an independent determinant, CD13 plays a role in the growth of DC/macrophage progenitors and precursors. (Blood. 2000;95:453-460)