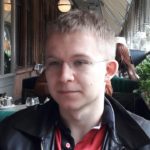 Rearranged Mixed Lineage lLukaemia (MLLr) is a form of leukaemia representing approximately 75% of paediatric acute leukaemia and 10% of adult leukaemia (AML and ALL), with a very poor prognosis of survival at 5 […]

After two years of “classe préparatoire” at Lycée Sainte Geneviève, I started the “Magistère de Physico-chimie moléculaire” of the Ecole Normale Supérieure of Cachan-University Paris Saclay ans received the diploma of the Ecole Normale Supérieure of Cachan in September 2017. To finish this training  I obtained with highest honours the master of molecular chemistry, sciences and engineering of the Ecole Polytechnique of Palaiseau in 2017. It is an international master’s degree in science that includes courses in organic chemistry, organometallic chemistry, chemical biology, medicinal and supramolecular chemistry as well as an education in industrial chemistry and management. I completed my training with a research tutoring under the supervision of Dr. Raphaël Rodriguez at the Institut Curie in Paris. I also received practical training in pharmaceutical and medical chemistry through internships, which were part of my academic background. I worked for four months in the Department of Medical Chemistry at the Royal College of Surgeons in Ireland in Dublin in Professor Donal O’Shea’s laboratory. I performed the synthesis and study of biocompatible fluorophore derivatives of azadipyrromethylene to improve the medical imaging of tissues during surgical procedures, particularly for an application in the ablation of colorectal cancer. I had to design a molecule with appropriate emission and absorption wavelengths to fit the medical machine available in surgical facilities. I had the opportunity to carry out my master thesis in chemistry, in the laboratory of Professor Chris Schofield at Oxford University, working on the study of antibiotic resistance based on a beta-lactam cycle. I synthesized some cephalosporin derivatives to inhibit the activity of metallo-beta-lactamase proteins. It is a hemi-synthetic work based on knowledge of the effects of the side chain on the stability and chemical structure of the protein target. I also developed small molecules derivatives as specific inhibitors of certain classes of Metallo-Bet- Lactamase. I obtained my  Master 2 in Biology  from Ecole Polytechnique  in 2018 and completed it by a research intership in the Epigenetic Chemical Biology unit, Pasteur Institut under the supervision of Dr.Paola Arimondo. The goal of this internship being to characterize the activity of a new family of inhibitors in MLLr cells, comparing it to EPZ-5676,a molecule previously  in clinical trials. I start in October my PhD under the supervision of Dr Paola Arimondo . My aim being the design and synthesis of a targeted library against epimethyltransferases.