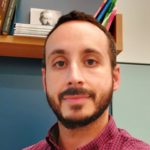 Distemper leukoencephalitis is a disease caused by the canine distemper virus (CDV) infection. It is a demyelinating disease affecting mainly the white matter of the cerebellum and areas adjacent to the fourth ventricle; the enzymes of the matrix metalloproteinases (MMPs) group, especially MMP-2 and MMP-9 have a key role in the myelin basic protein fragmentation and in demyelination, as well as in leukocyte traffic into the nervous milieu. To evaluate the involvement of MMPs during subacute distemper leukoencephalitis, we measured the levels of MMP-2 and MMP-9 by zymography in the cerebrospinal fluid (CSF) and in the cerebellum of 14 dogs naturally infected with CDV and 10 uninfected dogs. The infected dogs presented high levels of pro-MMP-2 in the CSF and elevated levels of pro-MMP-2 and pro-MMP-9 in the cerebellar tissue. Active MMP-2 was detected in the CSF of some infected dogs. As active MMP-2 and MMP-9 are required for cellular migration across the blood-brain barrier and any interference between MMPs and their inhibitors may result in an amplification of demyelination, this study gives additional support to the involvement of MMPs during subacute distemper leukoencephalitis and suggests that MMP-2 and MMP-9 may take part in the brain inflammatory changes of this disease.

http://www.ncbi.nlm.nih.gov/pubmed/23639293
Publié le: 11 Apr 2013 • Modifié le: 11 Sep 2015
We use cookies on our website to give you the most relevant experience by remembering your preferences and repeat visits. By clicking “Accept”, you consent to the use of ALL the cookies.
Cookie settingsACCEPT
Manage consent