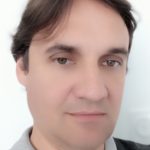 Factors triggering the de novo appearance of prions are still poorly understood. In yeast, the appearance of one prion, [PSI(+)], is enhanced by the presence of another prion, [PIN(+)]. The [PSI(+)] and [PIN(+)] prion-forming proteins are, respectively, the translational termination factor Sup35 and the yet poorly characterized Rnq1 protein that is rich in glutamines and asparagines. The prion domain of Rnq1 (RnqPD) polymerizes more readily in vitro than the full-length protein. As is typical for amyloidogenic proteins, the reaction begins with a lag phase, followed by exponential growth. Seeding with pre-formed aggregates significantly shortens the lag. A generic antibody against pre-amyloid oligomer inhibits the unseeded but not the self-seeded reaction. As revealed by electron microscopy, RnqPD polymerizes predominantly into spherical species that eventually agglomerate. We observed infrequent fiber-like structures in samples taken at 4 h of polymerization, but in overnight samples SDS treatment was required to reveal fibers among agglomerates. Polymerization reactions in which RnqPD and the prion domain of Sup35 (Sup35NM) cross-seed each other proceeded with a shortened lag that only depends weakly on the protein concentration. Cross-seeded Sup35NM fibers appear to sprout from globular RnqPD aggregates as seen by electron microscopy. RnqPD spherical aggregates appear to associate with and, later occlude, Sup35NM seed fibers. Our kinetic and morphological analyses suggest that, upon cross-seeding, the aggregate provides the surface on which oligomers of the heterologous protein nucleate their subsequent amyloid formation.