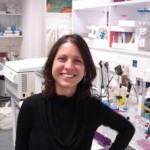 Strategies employed by pathogenic enteric bacteria, such as Shigella, to subvert the host adaptive immunity are not well defined. Impairment of T lymphocyte chemotaxis by blockage of polarised edge formation has been reported upon Shigella infection. However, the functional impact of Shigella on T lymphocytes remains to be determined. Here, we show that Shigella modulates CD4+ T cell F-actin dynamics and increases cell cortical stiffness. The scanning ability of T lymphocytes when encountering antigen-presenting cells (APC) is subsequently impaired resulting in decreased cell-cell contacts (or conjugates) between the two cell types, as compared with non-infected T cells. In addition, the few conjugates established between the invaded T cells and APCs display no polarised delivery and accumulation of the T cell receptor to the contact zone characterising canonical immunological synapses. This is most likely due to the targeting of intracellular vesicular trafficking by the bacterial type III secretion system (T3SS) effectors IpaJ and VirA. The collective impact of these cellular reshapings by Shigella eventually results in T cell activation dampening. Altogether, these results highlight the combined action of T3SS effectors leading to T cell defects upon Shigella infection.

https://pubmed.ncbi.nlm.nih.gov/31957253
Publié le: 01 May 2020 • Modifié le: 26 Aug 2021
We use cookies on our website to give you the most relevant experience by remembering your preferences and repeat visits. By clicking “Accept”, you consent to the use of ALL the cookies.
Cookie settingsACCEPT
Manage consent