PCR-ribotyping is a broadly used method for the classification of isolates of Clostridium difficile, an emerging intestinal pathogen, causing infections with increased disease severity and incidence in several European and North American countries. We have now carried out clustering analysis with selected genes of numerous C. difficile strains as well as gene content comparisons of their genomes in order to broaden our view of the relatedness of strains assigned to different ribotypes. We analyzed the genomic content of 48 C. difficile strains representing 21 different ribotypes. The calculation of distance matrix-based dendrograms using the neighbor joining method for 14 conserved genes (standard phylogenetic marker genes) from the genomes of the C. difficile strains demonstrated that the genes from strains with the same ribotype generally clustered together. Further, certain ribotypes always clustered together and formed ribotype groups, i.e. ribotypes 078, 033 and 126, as well as ribotypes 002 and 017, indicating their relatedness. Comparisons of the gene contents of the genomes of ribotypes that clustered according to the conserved gene analysis revealed that the number of common genes of the ribotypes belonging to each of these three ribotype groups were very similar for the 078/033/126 group (at most 69 specific genes between the different strains with the same ribotype) but less similar for the 002/017 group (86 genes difference). It appears that the ribotype is indicative not only of a specific pattern of the amplified 16S-23S rRNA intergenic spacer but also reflects specific differences in the nucleotide sequences of the conserved genes studied here. It can be anticipated that the sequence deviations of more genes of C. difficile strains are correlated with their PCR-ribotype. In conclusion, the results of this study corroborate and extend the concept of clonal C. difficile lineages, which correlate with ribotypes affiliation. 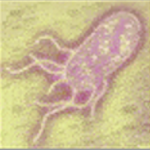 Clostridium difficile is increasingly associated with infections in hospitals and in the community, and hypervirulent types are emerging. Six research groups from 5 countries undertook this project, aiming to use genomic approaches to study […]