Purification and characterization of mouse interferon with novel affinity sorbents. 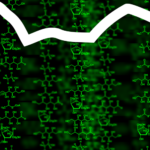 Several novel selective sorbents for mouse interferon are described that exploit the hydrophobic property and glycoprotein nature of this molecule. Low-molecular-weight ligands (hydrocarbons) and high-molecular-weight ligands (bovine serum albumin) immobilized on agarose bind selectively mouse L-cell interferon. The high selectivity of binding is due primarily to a hydrophobic effect, although electrostatic forces are also apparently involved. Mouse L-cell interferon binds to immobilized serum albumin and can be completely recovered by raising the ionic strength of the eluant. The specific activity of interferon preparations can be increased 2,000-fold to a value of 3 x 10(8) reference units per mg of protein in a single step with full recovery of the antiviral activity. A selective adsorption, although to a lesser degree, can be also obtained on hydrocarbon-coated agarose (Affi-Gel 202), resulting in 300-fold purification on desorption. The existence of two major components of mouse interferon was revealed upon its chromatography on the following sorbents: (i) bovine serum albumin-agarose, (ii) omega-carboxypentyl-agarose; and (iii) Bandeiraea simplicifolia lectin-agarose. This report thus provides for the first time a means for efficient and clear-cut separation of interferon components, thus enabling their further characterization.