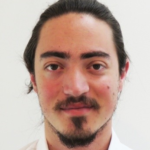 Abstract
Muscle and bone masses are highly correlated and muscles impose large loads on bone. Muscle wasting that accompanies bone loss has been poorly investigated. 21 female mice were spread into seven groups. At day 0, 18 mice received Botulinum toxin (BTX) injection in the quadriceps muscle to induce paralysis of the right hind limb; the left contralateral side was used as control. Mice were sacrificed at 7, 14, 21, 28, 56 and 90 days post-injection. A remaining group was sacrificed at day 0. Trabecular bone volume was determined by microcomputed tomography (microCT) at the distal femur and tibia proximal metaphyses on both sides. Limbs were immersed in an HgCl2 solution allowing muscle visualization by microCT. On 2D sections, the cross-sectional areas and form-factors were measured for the quadriceps at mid-thigh and gastrocnemius at mid-leg and these muscles were dissected and weighed. Bone volume decreased in the paralysed side. Bone loss was maximal at 56 days followed by recuperation at 90 days. The cross-sectional areas of gastrocnemius and quadriceps were significantly lower in the paralysed limb from 7 days; the decrease was maximum at 21 days for the gastrocnemius and 28 days for the quadriceps. No difference in form-factors was found between the two limbs. Similar results were obtained with the anatomical method and significant correlations were obtained between the two methods. Quantitative analysis of muscle loss and recovery was possible by microCT after using a metallic contrast agent. Loss of bone secondary to muscle wastage induced by BTX and recovery showed a parallel evolution for bone and muscles.
https://link.springer.com/article/10.1007%2Fs00223-017-0371-3
Publié le: 08 déc. 2017 • Modifié le: 31 janv. 2018