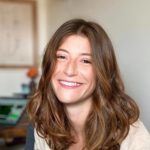 Human mutations of the GRID1 gene encoding the orphan delta1 glutamate receptor-channel (GluD1) are associated with schizophrenia but the explicit role of GluD1 in brain circuits is unknown. Based on the known function of its paralog GluD2 in cerebellum, we searched for a role of GluD1 in slow glutamatergic transmission mediated by metabotropic receptor mGlu1 in midbrain dopamine neurons, whose dysfunction is a hallmark of schizophrenia. We found that an mGlu1 agonist elicits a slow depolarizing current in HEK cells co-expressing mGlu1 and GluD1, but not in cells expressing mGlu1 or GluD1 alone. This current is abolished by additional co-expression of a dominant-negative GluD1 dead pore mutant. We then characterized mGlu1-dependent currents in dopamine neurons from midbrain slices. Both the agonist-evoked and the slow postsynaptic currents are abolished by expression of the dominant-negative GluD1 mutant, pointing to the involvement of native GluD1 channels in these currents. Likewise, both mGlu1-dependent currents are suppressed in GRID1 knockout mice, which reportedly display endophenotypes relevant for schizophrenia. It is known that mGlu1 activation triggers the transition from tonic to burst firing of dopamine neurons, which signals salient stimuli and encodes reward prediction. In vivo recordings of dopamine neurons showed that their spontaneous burst firing is abolished in GRID1 knockout mice or upon targeted expression of the dominant-negative GluD1 mutant in wild-type mice. Our results de-orphanize GluD1, unravel its key role in slow glutamatergic transmission and provide insights into how GRID1 gene alterations can lead to dopaminergic dysfunctions in schizophrenia.