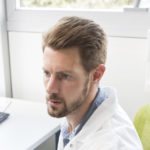 Insecticide resistance is a worldwide threat for vector control around the world, and Aedes aegypti, the main vector of several arboviruses, is a particular concern. To better understand the mechanisms of resistance, four isofemale strains originally from French Guiana were isolated and analysed using combined approaches. The activity of detoxification enzymes involved in insecticide resistance was assayed, and mutations located at positions 1016 and 1534 of the sodium voltage-gated channel gene, which have been associated with pyrethroid resistance in Aedes aegypti populations in Latin America, were monitored. Resistance to other insecticide families (organophosphates and carbamates) was evaluated. A large-scale proteomic analysis was performed to identify proteins involved in insecticide resistance. Our results revealed a metabolic resistance and resistance associated with a mutation of the sodium voltage-gated channel gene at position 1016. Metabolic resistance was mediated through an increase of esterase activity in most strains but also through the shifts in the abundance of several cytochrome P450 (CYP450s). Overall, resistance to deltamethrin was linked in the isofemale strains to resistance to other class of insecticides, suggesting that cross- and multiple resistance occur through selection of mechanisms of metabolic resistance. These results give some insights into resistance to deltamethrin and into multiple resistance phenomena in populations of Ae. aegypti.