Various pathogenic clostridia produce binary protein toxins associated with enteric diseases of humans and animals. Separate binding/translocation (B) components bind to a protein receptor on the cell surface, assemble with enzymatic (A) component(s), and mediate endocytosis of the toxin complex. Ultimately there is translocation of A component(s) from acidified endosomes into the cytosol, leading to destruction of the actin cytoskeleton. Our results revealed that CD44, a multifunctional surface protein of mammalian cells, facilitates intoxication by the iota family of clostridial binary toxins. Specific antibody against CD44 inhibited cytotoxicity of the prototypical Clostridium perfringens iota toxin. Versus CD44(+) melanoma cells, those lacking CD44 bound less toxin and were dose-dependently resistant to C. perfringens iota, as well as Clostridium difficile and Clostridium spiroforme iota-like, toxins. Purified CD44 specifically interacted in vitro with iota and iota-like, but not related Clostridium botulinum C2, toxins. Furthermore, CD44 knockout mice were resistant to iota toxin lethality. Collective data reveal an important role for CD44 during intoxication by a family of clostridial binary toxins. 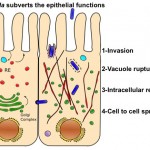 The distribution of cholesterol – in a gradient – is essential for compartments organization. Cholesterol distribution within the organelles should be tightly controlled but so far little is known on the dynamics its intracellular […]