Buruli ulcer is an emerging human disease caused by infection with a slow-growing pathogen, Mycobacterium ulcerans, that produces mycolactone, a cytotoxin with immunomodulatory properties. The disease is associated with wetlands in certain tropical countries, and evidence for a role of insects in transmission of this pathogen is growing. Comparative genomic analysis has revealed that M. ulcerans arose from Mycobacterium marinum, a ubiquitous fast-growing aquatic species, by horizontal transfer of a virulence plasmid that carries a cluster of genes for mycolactone production, followed by reductive evolution. Here, the ecology, microbiology, evolutionary genomics and immunopathology of Buruli ulcer are reviewed. 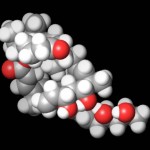 Inflammation adversely affects the health of millions of people worldwide and there is an unmet medical need for better anti-inflammatory drugs. Our group evaluates the therapeutic interest of mycolactone, a polyketide-derived macrolide produced by […]

Mycolactone of M. ulcerans and immunodulation

Mycolactone is a diffusible macrolide produced by Mycobacterium ulcerans, the causative agent of a chronic skin disease called Buruli ulcer. Defective cellular immune responses, at the local and systemic levels, are hallmarks of Buruli […] 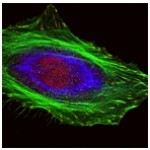 Mycolactone of M. ulcerans and the actin cytoskeleton