In comparison to other bacterial species, genetics and molecular basis of the pathogenesis of leptospires are in their infancy. An improved understanding of leptospiral pathogenesis requires reliable genetic tools for functional genetic analysis of Leptospira spp.

We generated kanamycin, gentamycin, and spectinomycin resistance cassettes as selectables markers for genetic manipulations in Leptospira spp. We have shown that the E. coli lac system is functional in Leptospira and can be used to control the expression of genes. The Photorhabdus luminescens luxCDABE cassette have been transferred into Leptospira strains to produce luminescent leptospires in live mice. These bioluminescent leptospires are novel tools that will be useful to test the efficacy of antiobiotic treatments or vaccines against leptospirosis. We have previously generated replicative vectors for the saprophyte L. biflexa but none of these plasmids showed autonomous replication in pathogenic strain. In a recent study, cloning of the putative 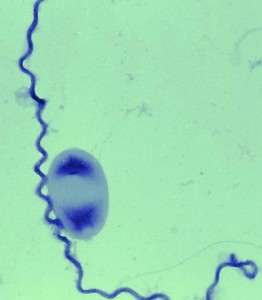 replication origin of a prophage-like region of pathogenic Leptospira strains into an E. coli conjugative plasmid allowed autonomous replication in both the saprophytic and pathogenic strains. We also report the successful use of the plasmid for complementation of mutants in the pathogen L. interrogans. Genetic modifications of the pathogen are limited primarily to random transposon mutagenesis and there exist only a few examples of mutants obtained by targeted mutagenesis. Thus, there is a clear need for additional tools for gene knock-out in Leptospira spp. Transcription Activator-Like Effectors (TALEs) are a recently described group of repressors which modify transcriptional activity in prokaryotic and eukaryotic cells by directly binding to a targeted sequence within the host genome. We demonstrated that TALE is effective at reducing expression of targeted genes within saprophytic and pathogenic strains of Leptospira spp., providing an additional genetic manipulation tool for this genus. More recently, we demonstrated complete gene silencing in L. biflexa cells when both dCas9 and single-guide RNA (sgRNA) targeting the coding strand of the β-galactosidase gene were expressed simultaneously. In addition, flagellar motor switch FliG gene silencing resulted in reduced bacterial motility. To the best of our knowledge, this is the first work applying the CRISPRi system in Leptospira and spirochetes in general, expanding the tools available for understanding leptospiral biology.

The genus Leptospira is composed of both saprophytic and pathogenic members, such as L. biflexa and L. interrogans, respectively. L. biflexa is a “fast-growing” organism with a generation time of 5 hours, in comparison to 20 hours for pathogenic strains. Our group has developed a number of tools for genetic manipulation of the saprophyte L. biflexa in recent years. In contrast, pathogenic strains are poorly transformable. Sequencing of the genome of L. biflexa, our model bacterium, has also been completed. These advances provide us with an opportunity to use L. biflexa as a model bacterium for studying leptospiral biology. High-molecular-weight leptospiral immunoglobulin-like repeat (Lig) proteins were previously identified as putative virulence factors in pathogenic Leptospira spp. The pathogen-specific genes encoding LigA and LigB were expressed in the non-pathogen L. biflexa; thus confering a virulence-associated phenotype in L. biflexa, namely adhesion to eukaryotic cells, fibronectin, and fibrinogen, suggesting the involvement of Lig proteins in cell adhesion. This study indicates that L. biflexa can serve as a surrogate host to characterize the role of key virulence factors of the causative agent of leptospirosis. In contrast to the pathogens thousands of random mutants can be readily obtained in the non pathogen L. biflexa by random insertion of Himar1 in the genome, thereby generating extensive libraries of mutants that could be screened for phenotypes affecting diverse aspects of the biology of the bacterium.