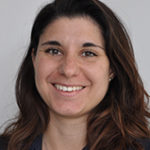 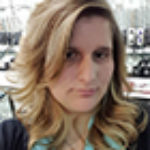 Compared with other infectious diseases, invasive mycoses are neglected diseases. They remained poorly known, underdiagnosed and understudied in many countries around the world despite the increasing public health burden they represent now. The population at risk for life-threatening fungal infections is indeed growing worldwide,  with a high mortality rate often exceeding  40% despite the availability of  antifungal drugs. Overall, awareness of the importance of these pathogens and the diseases they cause is low, reflected by the low funding of medical mycology.

One of the major issue when recording data on the epidemiology of diseases is the accuracy of the data, and the ability to double check them with an independent source of information (capture-recapture method). We thus collaborate with  Didier Che at SPF (who has access to other sources of information such as the national hospital discharge database), and with a nationwide network of dedicated clinicians and microbiologists/mycologists composing the French Mycoses Study Group who diagnose and treat the patients with invasive fungal infections. They contribute to these surveillance programs by notifying their cases through secured website (RESSIF) using Voozanoo™, a web-based platform for creating surveys and information systems for public health. They also sent the corresponding isolates that we re-identify using a polyphasic approach (morphology, biochemical tests, MIC determination by EUCAST method, MALDI-TOF and nucleotide sequences). 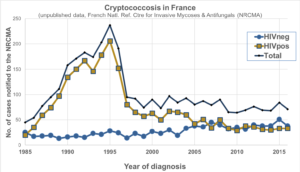 The surveillance programs started in 1985 with cryptococcosis allowing us to follow the impact of the AIDS epidemics on the incidence of cryptococcosis. The CryptoA/D study that enrolled 230 HIV-positive and -negative patients diagnosed in France from 1996 to 2011 allowed us to analyze the parameters associated with clinical presentation and outcome of cryptococcosis, to show that mixed infections are not uncommon due to mixtures of mating-type, serotypes and genotypes infecting the same patients and to study the population’s genetics of the isolates. Data ans strains collected through these programs are a means to study how the strains diversity affect host response.

We also described the epidemiology of yeasts fungemia, aspergillosis and mucormycosis in France based on the collaboration with SPF and our colleagues clinicians and mycologists composing the SAIF (Surveillance of Invasive Aspergillosis in France) or the YEASTS (Observatoire des Levures) networks. The YEASTS program is still ongoing with more than 5,000 cases of yeasts fungemia registered and analysed since 2002.

Detection of fungal outbreaks is often hampered by the diversity of fungal species involved, the small number of genomes annotated, and the lack of reliable typing tools for every pathogenic species. Determining whether a cluster of rare fungal infections represent a true outbreak or just an unusual coincidence is, however, critical for adequate investigation and patient’s management. We are thus developing genotyping methods based on whole genome sequencing (WGS) for several fungal pathogens. We recently investigated rapidly fatal cases of invasive infections due to a fungus later identified as Saprochaete clavata were reported in France. WGS and clone-specific genotyping were used to analyze recent and historical isolates (Assembled sequences of S. clavata i 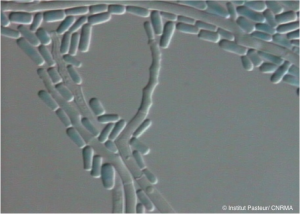 solate CNRMA 12.647 are accessible in the EMBL database as CBXB010000001 to CBXB010000339). Phylogenetic analysis identified one clade, which accounted for 16/18 outbreak cases. Microbiological investigation on environmental, drug or food sources was negative, but epidemiological analysis of exposures pointed to a medical device used for storage and infusion of blood products without detection of the fungus from unused devices. We developed a RT-PCR technique that allows us to identify the clone in less than 36 hrs for sporadic cases notified to the NRCMA.

Other outbreaks due to rare species are currently being investigated in collaboration with PIBnet,  the Pasteur International Bioresourses Network (and more specifically Vincent Enouf, Sylvain Brisse and Alexis Criscuolo) on campus and with colleagues outside the campus (Cécile Neuveglise, INRA).