The Molecular Virology and Vaccinology Unit (VMV) is implicated in a variety of research projects ranging from the basic study of the early steps of HIV-1 replication, through lentiviral vectorology, to applied gene therapy and vaccination projects. This apparent diversity is in fact unified by a central property of lentiviruses that distinguishes them from all other retroviruses: their ability to efficiently replicate in non-dividing cell targets through active nuclear import of their genome.

Molecular Virology: Active nuclear import of the HIV-1 genome into the interphasic nucleus is the key feature that accounts for mitosis independent replication of lentiviruses. We showed earlier that a three-stranded DNA structure, called central DNA Flap, created during HIV-1 reverse transcription at the exact center of the HIV-1 DNA genome, acts as a cis-determinant of HIV-1 DNA nuclear import. HIV-1 mutant viruses, or first-generation lentiviral vectors, which lack the DNA Flap show a strong default of entry into the cell nucleus. An extensive mechanistic study of the role of the DNA Flap in HIV-1 nuclear import has been conducted, combining molecular, cellular and ultrastructural approaches. We found that DNA Flap formation, the very last event in HIV-1 reverse transcription, acts as a viral promoting element for the uncoating of the reverse transcription complex (RTC), including an intact capsid shell, to form the pre-integration complex (PIC), that has a size compatible with translocation through the nuclear pore. Most interestingly, scanning electron microscopy studies revealed that DNA Flap defective viruses accumulate at the nuclear pore trapped within intact capsids. This reveals a direct impact of the DNA Flap in an as-yet unexplored step of HIV-1 replication: the maturation (or uncoating) of the RTC into PIC at the nuclear pore. Ongoing work and research projects include the study of HIV-1 host-cell interactions for nuclear import and ultra-structural analysis of the HIV-1 PIC.

Uncoating of the pre-integration complex at the nuclear pore 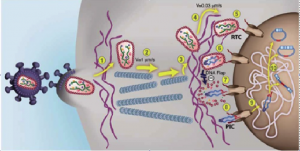 Figure 9 An uptaded model for HIV-1 intracellular transport and DNA Flap-dependent nuclear import. (1) HIV-1 viruses enter target cells by receptor-mediated fusion and need to cross and/or interact with the actin cortex underlying the plasma membrane for productive infection to take place (Campbell et al, 2004). Post-fusion uncoating does not take place at this stage (1) HIV-1 RTCs proceeding directly from the core of the particle undergo rapid and saltatory micro tube-directed movement towards the nuclear compartment (McDonald et al 2002 ; Arhel et al,2006b). (3) RTCs undergo transition from micro tubes onto actin filaments at close proximity to the nuclear compartment and then (4) slow actin-directed movements towards the nuclear membrane (Arhel et al, 2006b). (5) HIV-1 CAs containing viral genome dock at NPCs. Interaction with cytoplasmic filaments emanating from NPCs is hypothetical. (6) As docking of RTCs at the nuclear pore is more rapid than RT, we surmise that most of viral DNA synthesis occurs within an integral CA core docked at the NPC. Upon RT completion and formation of the central DNA Flap, which is consequent upon the final strand displacement event, (7) docked RTCs can undergo DNA-Flap-dependent maturation, leading to PIC formation lacking the CA shell. Complexes that lack DNA Flap formation accumulate within intact HIV-1 CAs that forbid translocation through the nuclear pore. (8) The HIV-1 PIC is translocated through the nuclear pore. the folded structure of the PIC via intergrade dimerization is hypothetical (Zennou et al, 2000). (9) The HIV-1 PIC undergoes a poorly characterized diffusive intra nuclear transport (Arhel et al, 2006b) and (10) either integrates into host cell chromatin or circularizes into 1- or 2-LTR circles.

Vectorology/Gene Therapy: Mitosis-independent replication of HIV is exploited by lentiviral vector technology for the efficient transduction of non-mitotic cells. We showed a few years ago that re-insertion of the DNA Flap into lentiviral vectors strongly stimulates gene transfer efficiency, including in human hematopoietic stem cells (HSC), brain or liver cells. DNA Flap is nowadays universally used in lentiviral vectors. Efficient transduction of HSC and our pre-clinical collaborative studies with a murine model of Adrenoleucodystrophy recently lead to a first successful gene therapy human trial. We are now conducting several optimization projects of the vector backbone, for the use of lentiviral vectors as vaccines. We are also pursuing long-standing collaborations in the field of HIV gene therapy and lentiviral vectorology.

Vaccinology: Lentiviral vectors are also able to stably transduce non-dividing antigen presenting cells (APCs) such as dendritc cells (DCs). This allows a prolonged antigen presentation through the endogenous pathway, in contrast to all other viral-derived vaccination vectors such as canary-pox adenoviral vectors, that rely on a transient cross-presentation of the antigen. Endogenous Ag presentation make lentiviral vaccination vectors an unprecedented platform for the induction of strong, diversified and memory cellular immune responses. Using this innovative vaccination strategy, we recently demonstrated a long-term sterilizing immunity induced in mice against Plasmodium yoelii, a murine model of malaria. We also showed in a first pilot study in macaques, a strong protection against a massive SIV challenge. The vaccine prototype was further deeply optimized, both in terms of efficacy and safety. This translated into an impressive protection in the SIVmac251/Macaques model with all animals stably controlling SIV replication to undetectable levels after a low dose, cost effective, vaccination regimen (ongoing work). 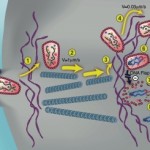 The Molecular Virology and Vaccinology Unit (VMV) is implicated in a variety of research projects ranging from the basic study of the early steps of HIV-1 replication, through lentiviral vectorology, to applied gene […]