Identifying and exploiting the reservoir of vector-borne diseases

The group’s research focus over the last several years has been on the role of asymptomatic infections in the epidemiology of vector-borne diseases. Formerly we worked exclusively on malaria, with particular emphasis on the role of mosquito bites on eliciting “aestivating” parasites, who have survived the dry mosquito-free season in man, to produce parasite stages infectious to mosquitoes. Broadly speaking, there appears to be an important role determined by whether the mosquitoes and/or parasite elicit a Th2 (as seen through IgE) response. Parasites in such individuals do start replicating at the onset of the mosquito season and this does seem to be in response to mosquitoes. Recent laboratory animal model studies have confirmed that this leads to increased transmission to mosquitoes. Interestingly, we were then able to show that individuals with an atopic tendency also had reduced capacity to develop clinical immunity. The overlap of allergy and malaria remains a central topic of the laboratory.

Dengue Since 2010 we have expanded into dengue, constructing successful ANR (AEDESS) and FP7 (DENFREE) projects to work on dengue epidemiology. These collaborative projects in India, Thailand and Cambodia have revealed that indeed asymptomatic or inapparent, subclinical infections with dengue virus are very common and are infectious to mosquitoes. With such field evidence we have built mathematical models for both malaria and dengue on the subject that further underline the importance of considering such unnoticed infections.

We are currently focusing on the spatial epidemiology of dengue micro- and macroscales. In collaboration with the Insitut Louis Malardé, we have implemented metapopulation approaches to understanding dengue epidemics in French Polynesia. At a finer scale, in Delhi, in collaboration with the National Malaria Research Institute and the local public health sector (Municipal Corporation of Delhi) we have been able to show that not only is there distinct spatio-temporal clustering of dengue infections, but also that there is apparently a continuous reservoir of virus “out of” season that acts as a source of virus for the next season. We are now coordinating mosquito intervention trials to attempt to target mosquitoes based on epidemiological findings: in seasonal Delhi we will target the mosquito “out of” season and in perennial Khon Kaen we will implement a cluster-approach and attempt to stop the spread of potentially infectious mosquitoes from hotspots. In Cambodia, in the context of ANR PANIC, we will assess the impact on dengue of the implementation of auto-dissemination of insect growth regulators in schools. As part of The ECOMORE 2 project, which aims to guide economic development initiatives in 5 countries belonging to the Southeast Asia region, in contributing to measure and minimize the health risks for local population in the context of economic development and climate change throughout a One Health approach, the Philippines Workpackage will implement an innovative program for the control of vector-borne diseases to reduce the risk of dengue, Chikungunya and Zika in urban and peri-urban areas. Finally, as part of the DENCLIM consortium, disease surveillance, mosquito infestation, meteorology, socioeconomics, knowledge, attitudes and practices, and land cover analyses will be combined with future climatic scenarios and population growth trends to predict potential changes in dengue risk factors and community vulnerabilities in border areas of these two countries. Assessing these factors is instrumental to developing adaptation strategies at local and regional levels. Outputs will add new knowledge on climate-induced vulnerability and its impact on dengue transmission. 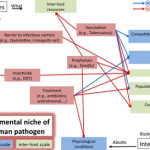 This project aims to shift from disease control to reverse conservation biology of pathogens in order to devise new public health strategies. Our objective is a qualitative understanding of the “niche” of two different […]

Protozoan parasites of the genus Leishmania generate severe human diseases termed Leishmaniases. Due to their frequency and the severity of certain clinical forms, these diseases represent a major public health problem and limit the […]