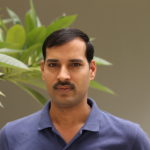 Histone H3 and its variants regulate gene expression but the latter are absent in most ascomycetous fungi. Here, we report the identification of a variant histone H3, which we have designated H3VCTG because of its exclusive presence in the CTG clade of ascomycetes, including Candida albicans, a human pathogen. C. albicans grows both as single yeast cells and hyphal filaments in the planktonic mode of growth. It also forms a three-dimensional biofilm structure in the host as well as on human catheter materials under suitable conditions. H3VCTG null (hht1/hht1) cells of C. albicans are viable but produce more robust biofilms than wild-type cells in both in vitro and in vivo conditions. Indeed, a comparative transcriptome analysis of planktonic and biofilm cells reveals that the biofilm circuitry is significantly altered in H3VCTG null cells. H3VCTG binds more efficiently to the promoters of many biofilm-related genes in the planktonic cells than during biofilm growth, whereas the binding of the core canonical histone H3 on the corresponding promoters largely remains unchanged. Furthermore, biofilm defects associated with master regulators, namely, biofilm and cell wall regulator 1 (Bcr1), transposon enhancement control 1 (Tec1), and non-dityrosine 80 (Ndt80), are significantly rescued in cells lacking H3VCTG. The occupancy of the transcription factor Bcr1 at its cognate promoter binding sites was found to be enhanced in the absence of H3VCTG in the planktonic form of growth resulting in enhanced transcription of biofilm-specific genes. Further, we demonstrate that co-occurrence of valine and serine at the 31st and 32nd positions in H3VCTG, respectively, is essential for its function. Taken together, we show that even in a unicellular organism, differential gene expression patterns are modulated by the relative occupancy of the specific histone H3 type at the chromatin level.