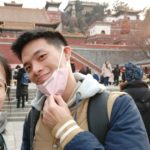 International travel could facilitate the spread of antimicrobial-resistant bacteria including extended spectrum β-lactamase-producing Enterobacteriaceae (ESBL-E). Previous studies, which attempted to understand the role of gut microbiota in the acquisition of antimicrobial resistant bacteria during international travels, are limited to western travellers.We established a prospective cohort of 90 Hong Kong travellers to investigate gut microbiota determinants and associated risk factors for the acquisition of ESBL-E. Baseline characteristics and travel-associated risk factors were gathered through questionnaires. Faecal samples were collected in 3-4 days before and after travel. Antimicrobial susceptibility of ESBL-E isolates was tested, and gut microbiota were profiled by 16S rDNA amplicon sequencing. Non-parametric tests were used to detect potential associations, and logistic regression models were used to quantify the associations. Random forest models were constructed to identify microbial predictors for ESBL-E acquisition.In total, 49 (54.4%) participants were tested negative for ESBL-E colonization before travel and were followed up after travel. A total of 60 ESBL-E isolates were cultured from 20 (40.8%) participants. Having low Actinobacteria richness and low abundance of short-chain fatty acid-producing bacteria in the gut microbiota before travel increased the risk of acquiring ESBL-E and the risk can be further exacerbated by eating raw seafood during travel. Besides, post-travel ESBL-E positive participants had increased abundances of several opportunistic pathogens such as Staphylococcus, Enterococcus, Escherichia/Shigella and Klebsiella. The random forest model integrating pre-travel microbiota and the identified travel-related risk factor could predict ESBL-E acquisition with an area under the curve of 75.4% (95% confidence interval: 57.9-93.0%).In this study, we identified both travel-related risk factors and microbiota predictors for the risk of ESBL-E acquisition. Our results provide foundational knowledge for future developments of microbiota-based interventions to prevent ESBL-E acquisition during international travels.