One fungus, which genes? Development and assessment of universal primers for potential secondary fungal DNA barcodes 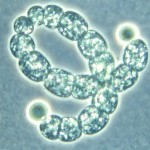