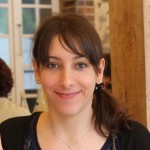 Metacaspases (MCAs) are cysteine peptidases expressed in plants, fungi and protozoa, with a caspase-like histidine-cysteine catalytic dyad, but differing from caspases, for example, in their substrate specificity. The role of MCAs is subject to debate: roles in cell cycle control, in cell death or even in cell survival have been suggested. In this study, using a Leishmania major MCA-deficient strain, we showed that L. major MCA (LmjMCA) not only had a role similar to caspases in cell death but also in autophagy and this through different domains. Upon cell death induction by miltefosine or H2O2, LmjMCA is processed, releasing the catalytic domain, which activated substrates via its catalytic dyad His/Cys and a proline-rich C-terminal domain. The C-terminal domain interacted with proteins, notably proteins involved in stress regulation, such as the MAP kinase LmaMPK7 or programmed cell death like the calpain-like cysteine peptidase. We also showed a new role of LmjMCA in autophagy, acting on or upstream of ATG8, involving Lmjmca gene overexpression and interaction of the C-terminal domain of LmjMCA with itself and other proteins. These results allowed us to propose two models, showing the role of LmjMCA in the cell death and also in the autophagy pathway, implicating different protein domains.