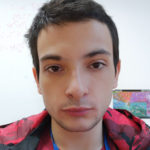 Viruses are able to evolve in vitro by mutations after serial passages in cell cultures, which can lead to either a loss, or an increase, of virulence. Cyprinid herpesvirus 3 (CyHV-3), a 295-kb double-stranded DNA virus, is the etiological agent of the koi herpesvirus disease (KHVD). To assess the influence of serial passages, an isolate of CyHV-3 (KHV-T) was passaged 99 times onto common carp brain (CCB) cells, and virus virulence was evaluated during passages through the experimental infections of common carp. After 78 CCB passages, the isolate was much less virulent than the original form. A comparative genomic analysis of these three forms of KHV-T (P0, P78 and P99) revealed a limited number of variations. The largest one was a deletion of 1363 bp in the predicted ORF150, which was detected in P78, but not in P99. This unexpected finding was confirmed by conventional PCR and digital PCR. The results presented here primarily suggest that, CyHV-3 evolves, at least in vitro, through an assemblage of haplotypes that alternatively become dominant or under-represented.