Dynamics of a Brownian circle swimmer 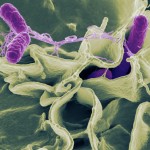 Self-propelled particles move along circles rather than along a straight line when their driving force does not coincide with their propagation direction. Examples include confined bacteria and spermatozoa, catalytically driven nanorods, active, anisotropic colloidal particles and vibrated granulates. Using a non-Hamiltonian rate theory and computer simulations, we study the motion of a Brownian “circle swimmer” in a confining channel. A sliding mode close to the wall leads to a huge acceleration as compared to the bulk motion, which can further be enhanced by an optimal effective torque-to-force ratio.