Aberrant DNA methylation is a well‑known feature of tumours and has been associated with metastatic melanoma. However, since melanoma cells are highly heterogeneous, it has been challenging to use affected genes to predict tumour aggressiveness, metastatic evolution, and patients’ outcomes. We hypothesized that common aggressive hypermethylation signatures should emerge early in tumorigenesis and should be shared in aggressive cells, independent of the physiological context under which this trait arises. We compared paired melanoma cell lines with the following properties: (i) each pair comprises one aggressive counterpart and its parental cell line, and (ii) the aggressive cell lines were each obtained from different host and their environment (human, rat, and mouse), though starting from the same parent cell line. Next, we developed a multi-step genomic pipeline that combines the DNA methylome profile with a chromosome cluster-oriented analysis. A total of 229 differentially hypermethylated genes were commonly found in the aggressive cell lines. Genome localization analysis revealed hypermethylation peaks and clusters, identifying eight hypermethylated gene promoters for validation in tissues from melanoma patients. Five CpG identified in primary melanoma tissues were transformed into a DNA methylation score that can predict survival (Log-rank test, p=0.0008). This strategy is potentially universally applicable to other diseases involving DNA methylation alterations. 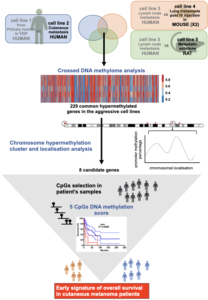